Picture taken on 17 September 1944 by Johan van Eerd. It was the liberation of the Dutch town Veghel part of Operation MARKET GARDEN. I colourised this picture in consultation with and with permission of the heirs of Johan van Eerd and on 17 September 2014, 70 years later this picture was published in a news paper as a remembrance on Market Garden.

The picture shows the happiness of the liberated people in Veghel. The names of the people on the picture are: Jet van Eerd, Jos van Arts (Father Quirinus) and the girl is Jeanneke Rath. Unfortunately we still don’t know the name of the American Soldier. After the picture was published in the newspaper the little girl on the picture contacted me (she still is alive). She remembered her dress was blue and the ribbon in her hair was orange. I visited her to give her personally a new colourised picture with the right colours. A very emotional moment for her. 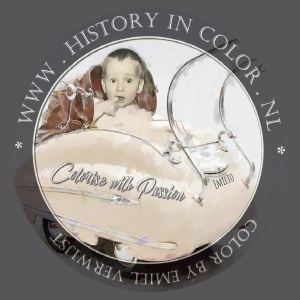